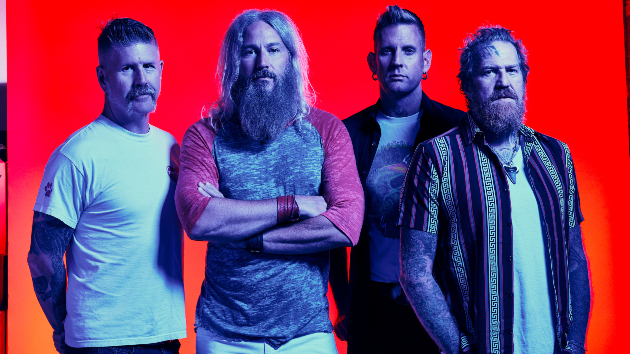 On the surface, at least half the title of Mastodon‘s upcoming album, Hushed and Grim, makes sense. Their music has often tackled grim subjects — the 2017 record Emperor of Sand, for example, was an entire metaphor for cancer — but, being a metal band, they’ve never been particularly hushed about it.

As guitarist Bill Kelliher tells ABC Audio, the title Hushed and Grim is in honor of Mastodon’s late manager, Nick John. Kelliher recalls one particularly tough scene, in which he and his band mates visited John while he was in home hospice care before he eventually succumbed to pancreatic cancer in 2018.

“‘Hushed and grim’ [were] the perfect adjective[s] to say what was happening,” Kelliher shares. “There we were, some of his closest friends and his wife and his family members, everybody’s just hushed.”

“Everybody’s just [feeling] unbelievable sadness,” he remembers. “That was the grim part.”

It was drummer Brann Dailor who came up with the title. In trying to explain how he and his band mates were feeling, he did what a lot of us do in troubled times — he turned to art.

“It was from Gone with the Wind,” Kelliher says of the Hushed and Grim phrase. “They’re talking about the Civil War and how it was just a grim scene, and Atlanta was ‘hushed and grim.'”

He continues, “It’s a different sense, but it translates to that whole scene of walking into [John’s] house where he was not gonna come back out alive.”

Given that Mastodon formed in Atlanta, the title was all the more fitting.

Hushed and Grim will be released October 29. It includes the previously released songs “Pushing the Tides” and “Teardrinker.”